Cercospora leaf spot disease is a fungal disease. It is caused by the pathogen Cercospora beticola Sacc.. Cercospora is the leaf disease of sugar beet with the highest impact worldwide. High moisture and warm weather are favouring the spreading of these leaf spots. 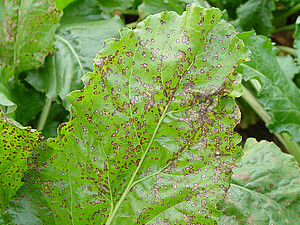 Round grey spots of 2-5mm size with a… 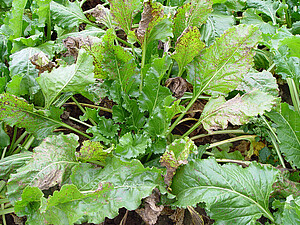 Under severe infestation by Cercospora,… 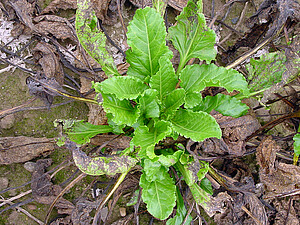 New leaves are growing, which has a… 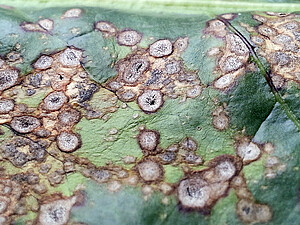 The dark leaf spots with greyish…

The fungi Cercospora survives in leaf debris in the soil. The sclerotia-like mycelium can survive for up to two years and forms conidia in spring, which can trigger the initial infection.

Typically, dark conidiophores with clear conidia (spores) can be seen inside the leaf spots as light gray. These are the structures the fungus uses for spreading. They are spreading by wind or water within the population. During the infection, the germ tube formed out of the fungal spores, penetrates the stomata of the leaf cells. The fungus continues to grow into the tissue. The fungal hyphae make their way between the cells. With the help of haustoria, they tap into the cells. The cell liquid supplies the fungus with nutrients. In the process, also toxins are released by the fungus, plant cells die and the leaf tissue becomes necrotic. The inner area of ​​the Cercospora spot is enclosed by a dark red to brown ring. (Graph)

Conidia formation and infection by the fungus find the most beneficial conditions in warm and humid weather: temperatures between 25 and 30 ° C and a humidity of 100% are optimal. However, growth and spread are also possible between 6 to 35 ° C with a humidity> 91%.

Depending on climatic requirements, the disease occurs regularly in the south and south-west of Germany, preferably in the river plains (e.g. Danube, Rhine). In other regions, a stronger infection can be detected in warmer years or in specific areas whose microclimate favour the development of the fungus. 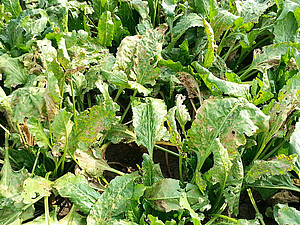 Leaf spots of Ramularia in autumn. 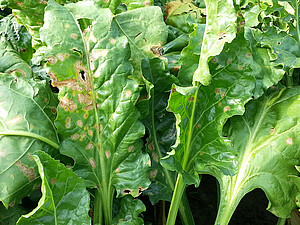 Leaf spots of Ramularia are twice the… 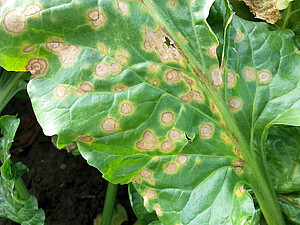 The spots are light brown- gray and… 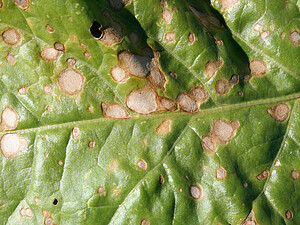 Light dots are visible in the spots,…

In Germany, the disease occurs more often in autumn, when Cercospora and Ramularia can also occur on the same leaf at the same time. However, also mixed infections of Cercospora, Ramularia, powdery mildew and rust can be observed frequently in this time.

Powdery mildew is a fungal disease. The pathogen is the fungus Erysiphe betae. The fungus is observed in all sugar beet growing regions around the world. It is of particular importance in areas with dry and warm climates. 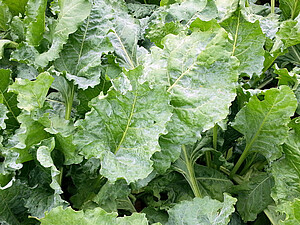 At the beginning Powdery mildew is hard… 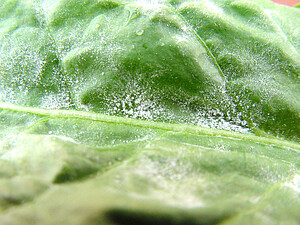 At the beginning of the infection a fine… 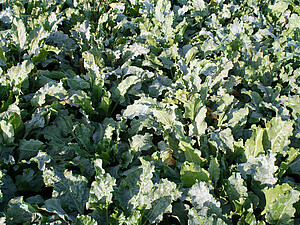 If the mildew infestation is severe and… 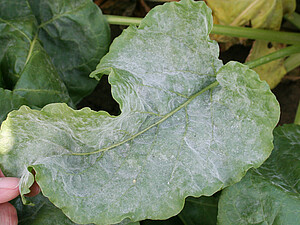 Powdery mildew is spread in dry and warm…

Powdery mildew, Erysiphe betae, forms a mycelium only on the leaf surface with gray-white conidia. Hyphae penetrate the epidermal cells and attach the mycelium on the leaf with the help of haustoria. The fungus supplies itself with nutrients from the haustoria. (Diagram) The mycelium is initially perceived as a spider web- like structure on the leaf surface resulting in a powder-like covering which is looking like flour. The white gray covering can be washed off. The conidia of the fungus are spread by wind.

In contrast to Cercospora, powdery mildew does not lead to the death of cells and tissue. Loss of yield is caused by its parasitic way of life.

And then again in comparison to Cercospora, the occurrence and spread of powdery mildew is favoured by warm, but dry weather. Powdery mildew infestation can cause yield losses that are as high as those with Cercospora leaf spots. An early infestation in July must be treated according to the threshold of infection. The plants should be checked by the end of August.

Beet rust is a fungal disease. It is caused by the pathogen Uromyces betae. Beet rust is rarely seen in sugar beet in Germany. As a rule, it then appears from early autumn. Sometimes there is an early infestation in July. Its special weather requirements limit or promote its appearance and spread greatly. This can lead to noticeable "rusty years" in beet cultivation. 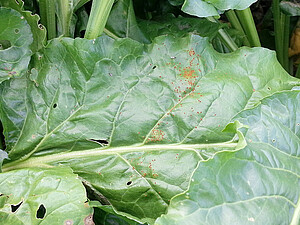 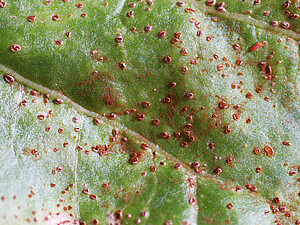 On a closer look it can be seen that the… 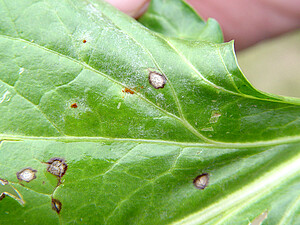 The fungus survives with the help of "winter spores" on leaf debris, which are in the soil from the last year. In spring, these "winter spores" - the teleutospores - germinate and create basidiospores that infect the beet plants. There is no change of host. Also spore beds (aecidia) can form on the underside of the leaves. The aecidiospores produced in it germinate and produce the clearly visible rust-red pustules on the beet leaves. Here the uredospores "summer spores" are produced. When the pustules burst, the spores emerge like red- rust dust. High humidity and temperatures between 10 and 22 ° Celsius are ideal for their development. Higher temperatures are counterproductive. In autumn the darker teleutospores "winter spores" are produced from the uredospores and the cycle continues.

Rust spots are relatively often found in beets in autumn, mostly mixed with powdery mildew or ramularia. The harmful effect is then usually negligible. The spores are spread by the wind, but rainfall also spreads the disease in the population.

The "Syndrom basse richesse" (SBR) is referred to the syndrome of low sugar. The disease is transmitted by Pentastiridius leporinus (leaf hopper) by transferring a bacterial pathogen complex into the plants. The yield losses can be very significant. 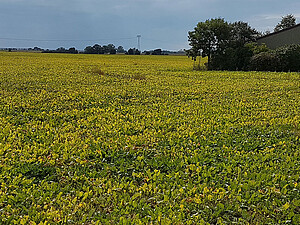 With a strong infection, the leaves are… 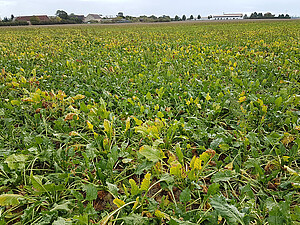 Chlorosis occurs first on the older… 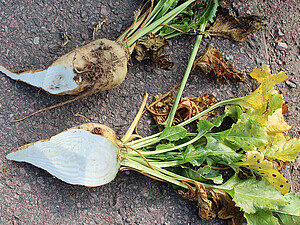 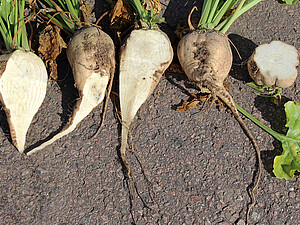 Due to dying vascular bundles the sugar… 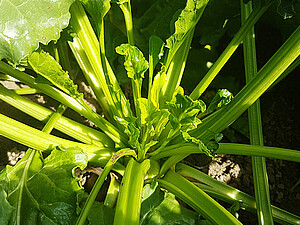 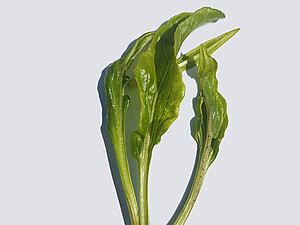 SBR was first observed in Burgundy, France, in 1990. The disease made its way through Switzerland to southern Germany. The carrier of the bacterial disease is the reed leaf cicada. If the sugar beets have been infected with the bacterial pathogen complex (a proteobacterium and a phytoplasm), the pathogens multiply and block the vascular system of the plants. The nutrient balance is disturbed. Chlorosis forms on the leaves and as the infection proceeds, the leaves are dying. The new growing leaves cost the sugar beet a lot of energy, which is gained by the stored sugar.

Detection, measurement and analysis – our app for plant protection management.