Wheat varieties on the market are generally the result of line breeding. Following crossing, selfing and selection for specific traits the best genotypes are continued to be bred through repeated selfing and selection until the desired combination of traits is present in a homozygous state. The breeding of homozygous, "pure" lines is a lengthy process over many generations.

Using double-haploid (DH) technology, homozygosity can be achieved within a single generation, resulting in an acceleration of the breeding of new varieties by several years. DH technology takes advantage of the fact that plants as part of their natural life cycle form haploid cells. These germ cells carry only a single ("haploid") set of chromosomes. By means of cell and tissue culture, plantlets can be regenerated from germ cells even in the absence of fertilization. By treatment e.g. with colchicine the number of chromosomes per cell can be doubled so that the plant reaches again its natural state with two sets of chromosomes. It is only then that the plant is fertile and can produce seed. These plants are referred to as double-haploids because the second set of chromosomes corresponds to an identical copy of the single, haploid set.

We use DH technology to produce tens of thousands of DH plants per year, which gain direct entry into our breeding programs and variety development. Marker applications help us breeding for individual and complex traits such as disease resistances. 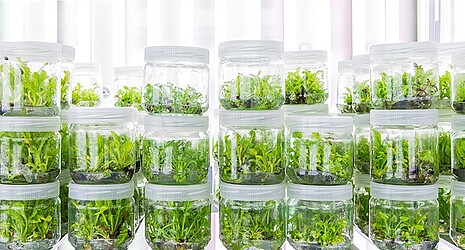 Clones of plants of high breeding value and characteristic traits can be maintained and multiplied in vitro.