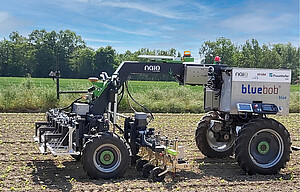 This spring, the second prototype of the BlueBob is weeding in the sugar beet fields. The next generation of the BlueBob prototype robot is a six-row, fully electric and autonomously navigating field robot, for mechanical weed control in sugar beets between the first two leaves stage and canopy closure. The project is being realised in cooperation with Naïo Technologies, leader in agricultural robotics solutions, and the Fraunhofer Development Centre for X-ray Technology EZRT, a division of the Fraunhofer Institute for Integrated Circuits IIS. BlueBob 2.0 is equipped with Naïo navigation technology and has been enhanced with Strube/Fraunhofer technology for sugar beet detection.

The field robot is used in the phase between the first two leaves stage and canopy closure, thanks to a combination of inter-rows tools guided by camera and in-row powered tools based on AI. This result is an almost complete elimination of weeds in the sugar beet field, i.e. between rows and between sugar beets in the row. The weeding principle is based on distinguishing between weeds and beets in real time and at a very early stage. This is an essential advantage for eliminating weeds quickly and to avoid competition between weeds and beets. All living plants are recorded by multispectral cameras. Each plant position is precisely located, and an artificial intelligence algorithm is used to analyse the phenotype of each individual plant and classify it into weeds and beets.

The BlueBob autonomously follows the track of the seed drill, which has recorded the RTK GPS coordinates of the driving route with an antenna on the seed drill thanks to the navigation system from Naïo Technology. Making U-turns on the headlands in the field is also no problem for the robot BlueBob. He autonomously finds the rows and the tracks, recognises the end of the field, and turns independently into the next track on its own.
The weeding performance around half a hectare per hour is impressive, and the autonomy of the batteries allows a continuous shift of eight hours.

Take a closer look at the second generation of the BlueBob: 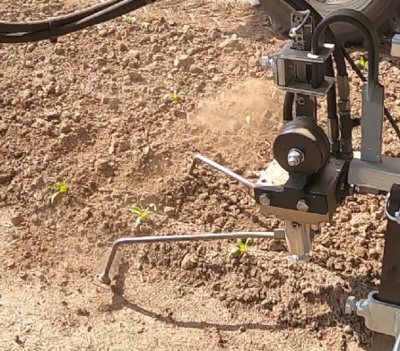 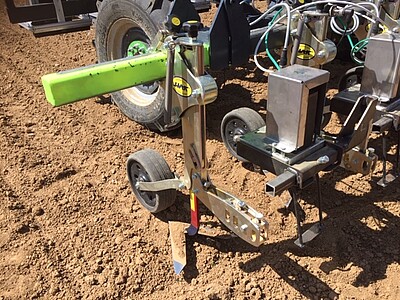 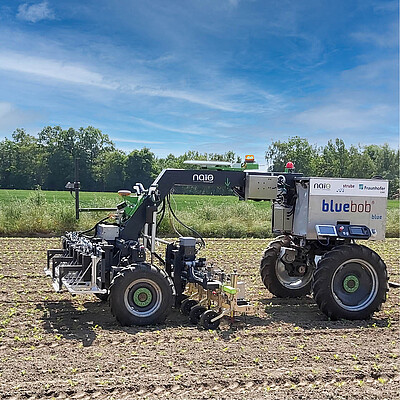